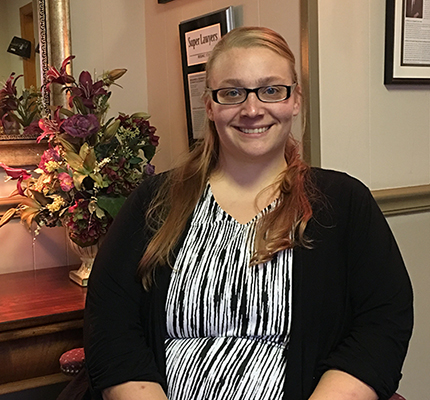 Gwendolyn Osborn-Gustavson is an Attorney Case Manager with Schwartz & Schwartz, Attorneys at Law.

Before joining Schwartz & Schwartz, Gwen served as the Supervising Case Manager at the law firm of Bergmann & Moore in Bethesda, Maryland. Gwen has a special interest in helping people with disabilities receive fair treatment under the law.

In particular, Gwen has a background in and passion for Veterans’ Benefits cases, and works hard to serve those who’ve served. She provides compassionate and zealous representation for victims of in-service traumas like military sexual trauma (MST), brain injuries (including TBIs), and combat injuries; surviving family members of Veterans who’ve passed away due to disabilities related to their military service; and others seeking VA benefits.  Gwen understands how difficult it can be to deal with the VA, and especially for Veterans with psychiatric disabilities like PTSD, how difficult it can sometimes be even to talk or write about what happened in service.  She prides herself on having a sympathetic and patient ear, and has had countless Veterans tell her that she made them feel heard and understood more than anyone else they’d spoken to.

Gwen loves the law and dedicates herself completely to her clients, but she is also a bit of a Renaissance Woman.  She was a bus driver in college, and still has her Commercial Driver’s License.  She has worked on numerous theatrical productions, and is excited to join the local theater community.  Gwen is a self-professed nerd; her wedding was Doctor Who-themed.  She loves baking, and happily pawns off her goods on friends, family, and the office.  We’ve joked about changing our motto to something like “Come in for a consult, leave with a muffin!”  When she’s not working and spending time with her family (including three cats and a dog), she can be found screaming her lungs out at small children—cheering and supporting a local swim team coached by her wife.