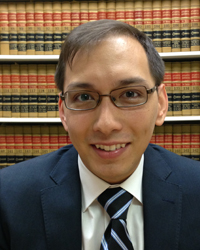 Joe Stanley is an Associate Attorney with Schwartz & Schwartz, Attorneys at Law who practices in Delaware, Maryland and Pennsylvania. Joe’s passion is in protecting and defending the individual rights of clients. You will seldom find anyone so dedicated to their client’s success.

Joe earned his Juris Doctor from Seton Hall University School of Law. Prior to that, Joe earned a Master’s Degree in Urban Affairs and Public Policy from University of Delaware, as well as his undergraduate Bachelor’s Degree with double majors in Political Science and Philosophy, and double minors in History and Legal Studies. He has served as a law clerk at Schwartz & Schwartz for two years prior to becoming an attorney and as a law clerk to Andres De Cos, Esq. in Wilmington, Delaware for two years prior to that. In addition, he worked as a Judicial Extern to the Hon. Charles W. Welch, III in the Court of Common Pleas in Dover, Delaware. Joe also served as a Legislative Fellow for the House Minority Caucus in the Delaware House of Representatives in 2011.

Joe is a classic car enthusiast and has owned numerous interesting cars that include: a ’79 Corvette, a ’67 Mustang, 70 Mustang, ’67 Barracuda, a ’66 Galaxie. Joe is also an avid chess player and often involved in local political campaigns.